Bike tour along the Tiber river 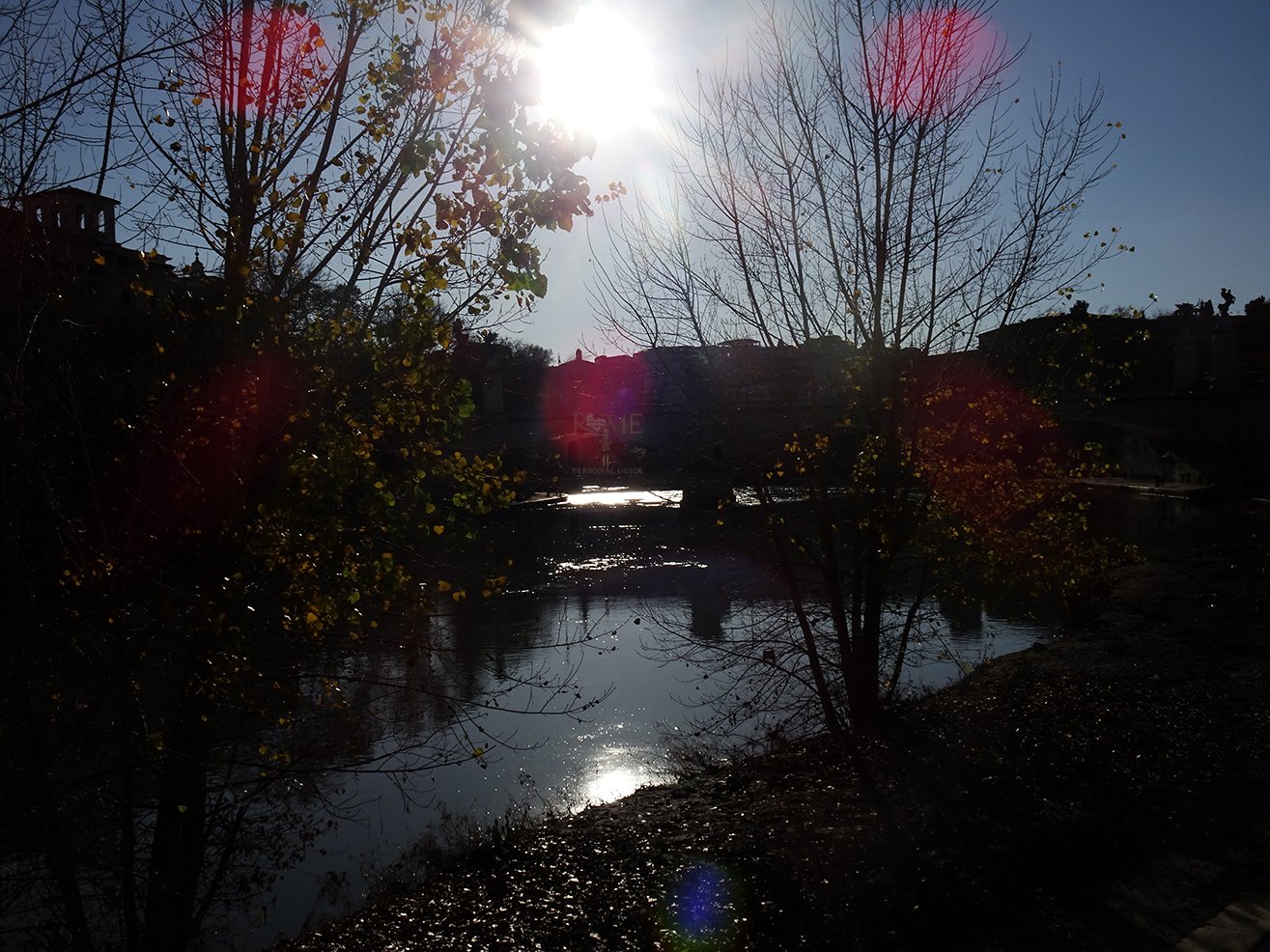 A bike tour on the Tiber-lane, along the river, across the center and back home is fun, it is healthy, it prepares you for the meals of these holidays besides the beauty with which Rome surrounds you. Moreover, the Tiber is the reason why Rome was grounded here, a water street that used to connect the Apennines Mountains to the Tyrrhenian Sea. In fact, almost all the capitals and the great civilizations of the world have been built around a river. So the people from the Greek colonies in the south of Italy used to meet here, before Rome was there, the Etruscan traders, a refined civilization that with its independent cities was stretching to the Alps northwards and to Naples area southwards. Also all the original Italian populations, later absorbed by the Romans, came here probably to exchange their products. Furthermore, we found ceramic bricks dating back to 10th century B.C. in the valley that stretch along the river from Tiberine Island to Circus Maximus. The famous Roman river stretches for 406 km (252 miles) across four different regions (Emilia Romagna, Tuscany, Umbria and Latium). In Rome Aniene river joins to flow into the sea between Fiumicino (where the main airport of the capital is located) and Ostia (also ancient harbor of Rome which today has a wonderful archaeological area and before salt mines land). The possibility of a bike tour along the Tiber are, therefore, many. The Tiber river is around 6,5m deep (21 ft circa) and 100 m wide (328 ft).

Bridges on the Tiber 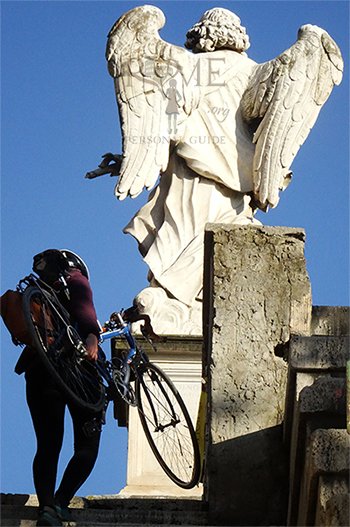 Across the Tiber in Rome, you can count around 38 bridges from all ages and with different purposes. The most ancient one connects what today we call Jewish Ghetto with the Tiberine Island and it dates back to 62 B.C. Its name is Pons Fabricius or Ponte Dei Quattro Capi from some beautiful ancient herms with multiple heads made out of marble. It’s a pedestrian one. Bridges had always played a central role, especially in earlier societies. Bridges connect but also put a territory into danger. To socialize, to exchange and improve your quality life, you have to take risikos and the Romans knew it well. The Pons Sublicius was the first one of the city of Rome and it was made of wood sleepers to be taken away quickly in case of danger. Furthermore, Pontifex Maximus (from Latin pons, pontis= bridge) was the title indicating the most important position in Roman religion. During the empire the emperor got the role, and today the Pope. In contrast, we inaugurated the most recent bridge in the middle of 2014. It’s dedicated to the Italian scientist, Rita Levi Montalcini who died in 2012. That’s why its name is Ponte della Scienza and it’s a bike-pedestrian one. It connects the neighborhoods Marconi and Testaccio where a fierce Gasometer stands and where Centrale Montemartini, an old power station protects an incredible marble statues collection. Perhaps, the most charming and typical one is Angel-bridge that you can see in the video below as we leave the Tiber bike lane. The famous Roman emperor Hadrian built this one and different Popes restored it. It acquired its lovely look thanks to Gianlorenzo Bernini, our city genius in XVIIth century. So as you see, a bike tour along the Tiber river offers urban variety and history. 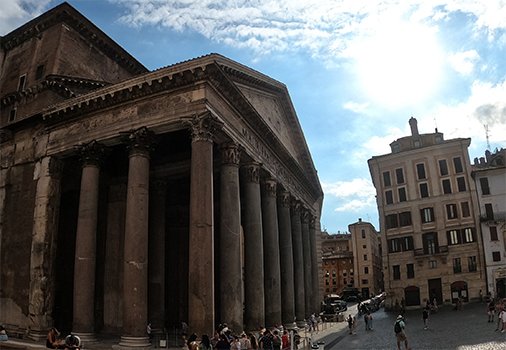 On the right bank of the blond Tiber (a old nickname probably coming from the sand color) runs one of the major bike lanes of Rome going from south northward crossing the heart of the eternal city. For sure it is one of the most loved by bikers but also by runners and walkers. In fact, you are far away from the traffic, besides you there is the violent flow of the river. Additionally, some herons, waterhens and many seagulls keep the view interesting between bridges in those stretches where the walls prevent the city view. Yes, we do have walls along the Tiber. We built them at the end of XIXth century to protect the urban architectures from the floods that before were part of Rome history. Still today, on the facade of S.Maria sopra Minerva Church, you can find scratched some of the levels of the highest floods.
The last one that invaded Rome on Christmas day of 1870 gained the nickname “the revenge of the Pope”, because the newborn Italian state just took the city sovereignty away from him and made it a capital. Revenge or not, we lost our ancient connection to the Tiber and it seems for the cheapest solution advanced. So this beautiful lane is our today connection to the river landscape. There are no more beaches where kids used to play and no ports to transport wares up and down the city but there are many more bridges of different architectures that reflect their character on the waters. There are people keeping healthy and socializing with red Valerian, capers, wild snapdragon, purple loosestrifes and Mexican daisies scattered around. The most common tree is the plane trees which decorate beautifully the above roads along the river with branches stretching out to the waters, but around the banks you can find willows, white and black poplars, wild figs, often growing from amazingly small holes in the walls and still American maples, locust trees and trees of heaven. Closest to the waters there are ladder brakes, carpets of green Azolla Caroliniana, rushes and sedges. Moreover, a bike tour along the Tiber river is rich in urban nature, from birds to three and flowers. 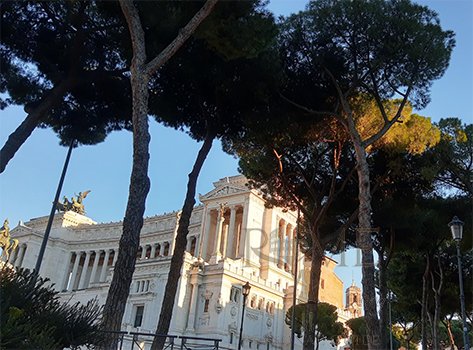 As you can imagine logistically speaking the bike lane isn’t very efficient. First, it’s because the river course is sneaky and the lane has to follow. Second, the lane on the banks is along the river and the city and its roads above the walls. Certainly, there are stairs to overcome the gap but only rarely you find a ramp suitable for bicycles. Last but not least, every winter as it rains a few times for some days, the banks with the lane disappear underwater. In spite of all these problems we claim our bike lane as a important part of a bigger project: a possible road by foot, bike and on a kayak from the sources to the sea. We call this project Regina Ciclarum, queen of the bikeroads. Hence, it matches with the Ancient Appian Way, the queen of all roads that lead to Rome (today an open beautiful archeological park). So as the “cats” supporting this road, we can with a bike tour along the river Tiber join part of the future of Rome. Eventually the Tiber will play again in our everyday lives a central role like it deserves it! 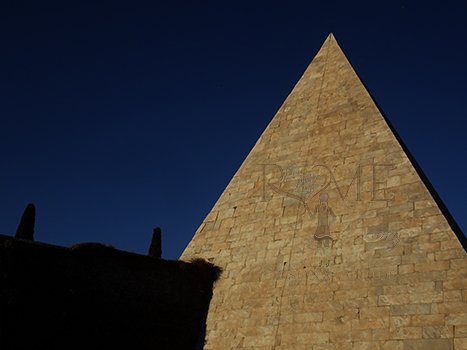 As a result, what you will see in the video is a part of the lane that goes from South, where there are some ruins of a Roman bridge, where there was a Roman post office, a kind of restaurant for pilgrims, to Angel-bridge. Then we emerged and we crossed the very central part of Rome: from Castel Sant’Angelo back to E.U.R. in the south. You will recognized perhaps a corner of the famous Piazza Navona, impossible to miss are the Pantheon, Piazza Venezia with the monumental Vittoriano and the Pyramid. You might wonder about the Pyramid if you don’t know its story. Since Julius Caesar felt in love with Cleopatra, a real passion for everything was Egyptian exploded in Rome and many rich people decided to have a pyramid as tomb, as dwelling for their dead bodies. They build those eclectic mausoleums with Roman engineering techniques. 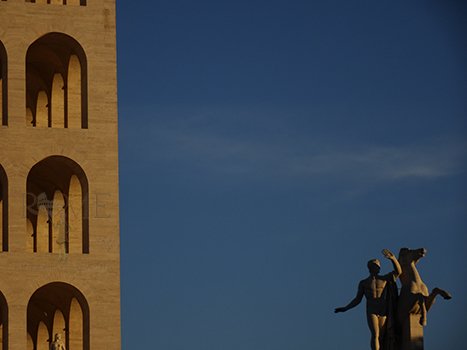 So the one you see has a cement heart (Pozzolana is a kind of ancient concrete) and it’s completely covered by marble of Carrara. It is so unreal, so out of context today that it looks a bit as a contemporary sculpture, without any judgement on our contemporary art and urban planning. It might be smaller than Egyptian ones, but we have not to forget that in Rome there were many of the kind and there was no pharaoh or pharaoh family. The ancient Romans believed officially in the Republic and Cleopatra, as she came in Rome, was obliged to sleep on the other side of the Tiber. Then, you will see a peculiar bridge that it is one of the landmarks of Testaccio now but it doesn’t cross the Tiber but the railway. It’s entitled to Settimia Spizzichino, deported with around one thousand other Roman Jews on October 16th of 1943. She was the only woman to come back, no children and 15 men. Next you will follow us through Garbatella quarter, one of those urban portions of the city built in the 20’s for the well being of people and that still today has a working class heart in spite of the fancy architectures. Finally, you will follow us towards E.U.R. where the beautiful winter Roman sun will put a temporary end to our bike tour along the river Tiber.