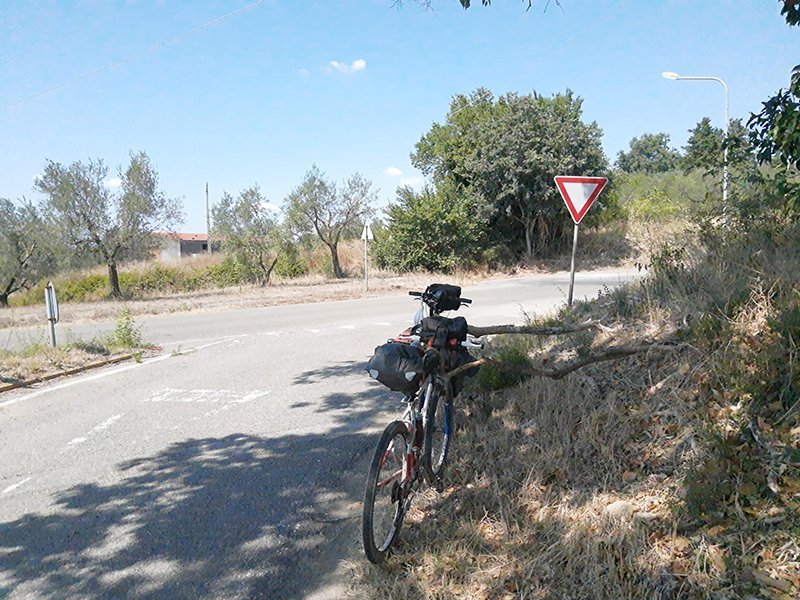 by Giorgia
on October 1, 2020
Marta was a fairy world and now, a month after, thinking about that little house in the holiday farm Orto delle Fate, where you could feel the lake breaze, thinking about the fishermen boats with their nets, about the proudness of these people that with skills offers ancient recipes tight to this water and to this world, the nostalgy bites painfully.
But that morning when we left #Marta in our hearths there was not a shade of this feeling. We were happy to stand up again on our pedals, to go forward to new places, new stories, to see new faces and to cross new eyes. A second breakfast in the village was a necessary premise to climb up the volcan. The mediterranean scrub welcomed us while climbing a dirty path and offered us a third breakfast of delicious blackberries. As the road flatten, along ploughed fields, a row of modern mills impressed us with their bulk: an impressive wind farm.
We arrived then in #Piansano, a charming village which territory testifies the #Etruscan presence with tombs and many archeological findings (among them two beautiful bronze mirrors). But the element that attract mostly our attention is the so-called #Loggetta, the medieval little loggia inglobated in the Town Hall. There are only a few examples of such an architecture on Italian territory and gave the name to the local magazine. The town is charming: the principle color is the one of the tuff stone of the surroundings that characterized the rocks along the road as we left town.
Then the agricultural vocation of the land made the yellow of hat prevalent and the landscape pastoral. So we arrive to #Cellere that hide in its hearth a #Farnese citadel that we discovered gradually unrolling slowly under our tires the narrow alleys that circle to converge to the stronghold. To go down from this treasure village to its valley characterized by the #Timone river, affluent of the #Fiora, its sources, mills and waterfalls was refreshing to the soul.
The territory was full of points of high interest, historically and naturally; the choice was hard and we pointed at the Fiora River. There are some famous artistic #heremitages and the nature is extremely luxuriant: you can find here the rare water violet (Hottonia palustris), the rare Santolina etrusca, endemic of the regional Anti-Apennine mountains, the tiger lily (Lilium bulbiferum), Turk’s cap lily (Lilium martagon), many narcissus and 39 species of spontaneous orchids as the rare fly orchid (Ophrys insectifera). Among the animals is necessary to quote the European otter that is in danger of disappearing in Italy. But we got charmed by the red cows taking their bath along the Fiora river! We refreshed ourselves too.
Canino was our aim. It’s one of the most famous towns of the region for the quality of its extra virgin olive oil which is recognized nationally. The town has a long and rich history that left many cultural and artistic signs behind. We loved the fact that it was the princedom of the rebellious brother of the emperor Napoleon. We owned him a lot: our delicious meal at the #TrattoriaGasperini was accompanied by one of the rare #PinotNoir of Italy. The vineyards are not far away from #Canino and were brought from France by Luciano #Bonaparte, as the landlord explained us. To crown our Etruscan search we slept in a house that was inspired by an Etruscan temple with decorations and frescos reproducing faithfull some of the most important findings. Qui dormì l’Etrusco B&B has each room dedicated to a different theme, our was dedicated to Eros, so I had to rush the shooting to make the video more appropriate. Happy Etruscan dreams!