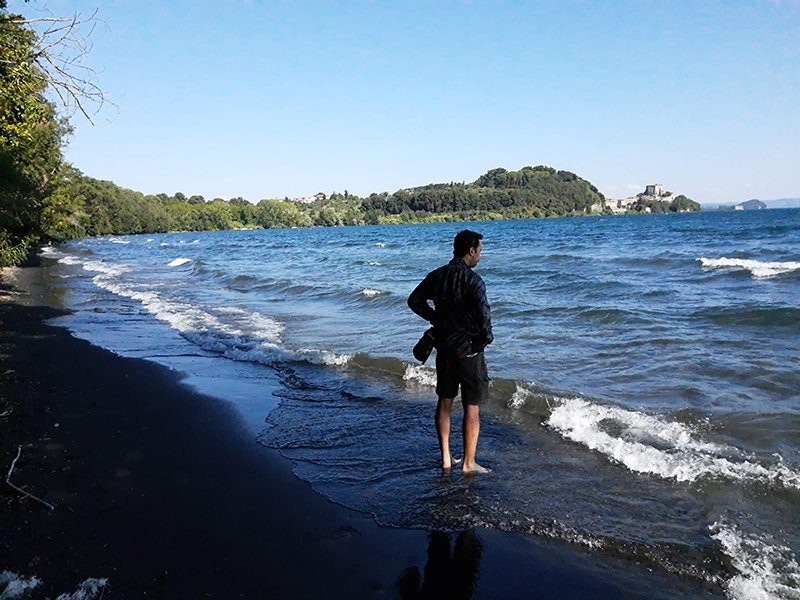 by Giorgia
on September 17, 2020
To let the muscles do a different activity after some days of intense movement is always a good idea but what is more amazing is how helps the change of perspective to have clear eyes and open mind. We slept wonderfully, the little house of #OrtoDelleFate was about 15m away from the beach and on a hill, so we felt like facing the lake #Bolsena. The surrounding is green and quiet, there was always a breeze coming that made the time spend out on the porch really enjoyable.
But on September 7th, our rest day, we had already ambitious projects. We planned to arrive #Capodimonte by foot along the coast to arrive the port just before 11am. At that time there was supposed to sail a ferry-boat for a lake tour but the water had been rough and probably the tour had to be cancelled.
So we had our breakfast at 8.30 in the garden of Orto delle Fate and went off for our walk of around 4 km. We crossed the bridge on the Marta river. This stream departs from the lake and flows for 54 km reaching some other Etruscan territories and the seaside. We enjoyed the view of the fishermen colorful boats on the beach and the large alley along it with shady trees. The locals call this part of Marta “Passeggiata” and it’s a embankment build between 1927 and ’29 to prevent the water damages to the buildings during the winter thunderstorms. Before that date in winter the water arrived often to the houses obligating the residents, mostly fishermen, to sail to go anywhere. That’s why in those times the village was called the #SmallVenice.
Today this area is quiet and full of nice benches, around a few people riding the bicycle and a few old fishermen that love to talk. Then we arrived to the dock: the area is called #Pontone and many of the locals love to swim here. Today there are some stairs climbing from the beginning of the dock up the cliff and bringing you to the other side beach. That’s #LaCava. The stairs are the only access to it and before them, you had to climb. There are caves along this special beach and the locals believe they are the rest of an ancient Etruscan settlement. From there we could adventure ourself in the low waters with the sandals in our hands along the coast to walk on a narrow beach of black volcanic sand for some long sections. The wild greenery dominates this whole lake part until almost the #Capodimonte cape. We felt like on a virgin Island: the scenery was amazing. Even more suggestive as we started to see from the wild beach the cape with the picturesque village dominated by the octagonal Rocca of the Farneses.
We arrived punctual at the port and luckily we raised anchor: the water had calmed down. The ferry-boat was able even to stop and let us swim in the #Bisentina island waters. The legends, the stories and the natural beauties of the two islands and of the lake made my first swim of the season special. After a lunch in front of the Rocca we had the time to go back and take pictures of our wonderful wild walk on the side of Bolsena lake, to relax in our “fairy garden” and then to reach the Fishermen Garage* for a lucullan dinner and a fairy sunset.
P.s. * #LaRimessaDeiPescatori was born from the cooperative of the fishermen of #Marta, where the Pope had his fishery. The story wants that when he was living in Avignon (XIV century), he missed to eat #eel (it. anguilla) and whitefish (it. Coregoni or Lavarello) from Marta. For the first one the local population found a solution carrying the eels still alive in water inside barrels to France. The white wine you see on the table is a natural one produced by our Orto delle Fate (the holiday farm we arrived on stage VI), in engl. Fairy garden.