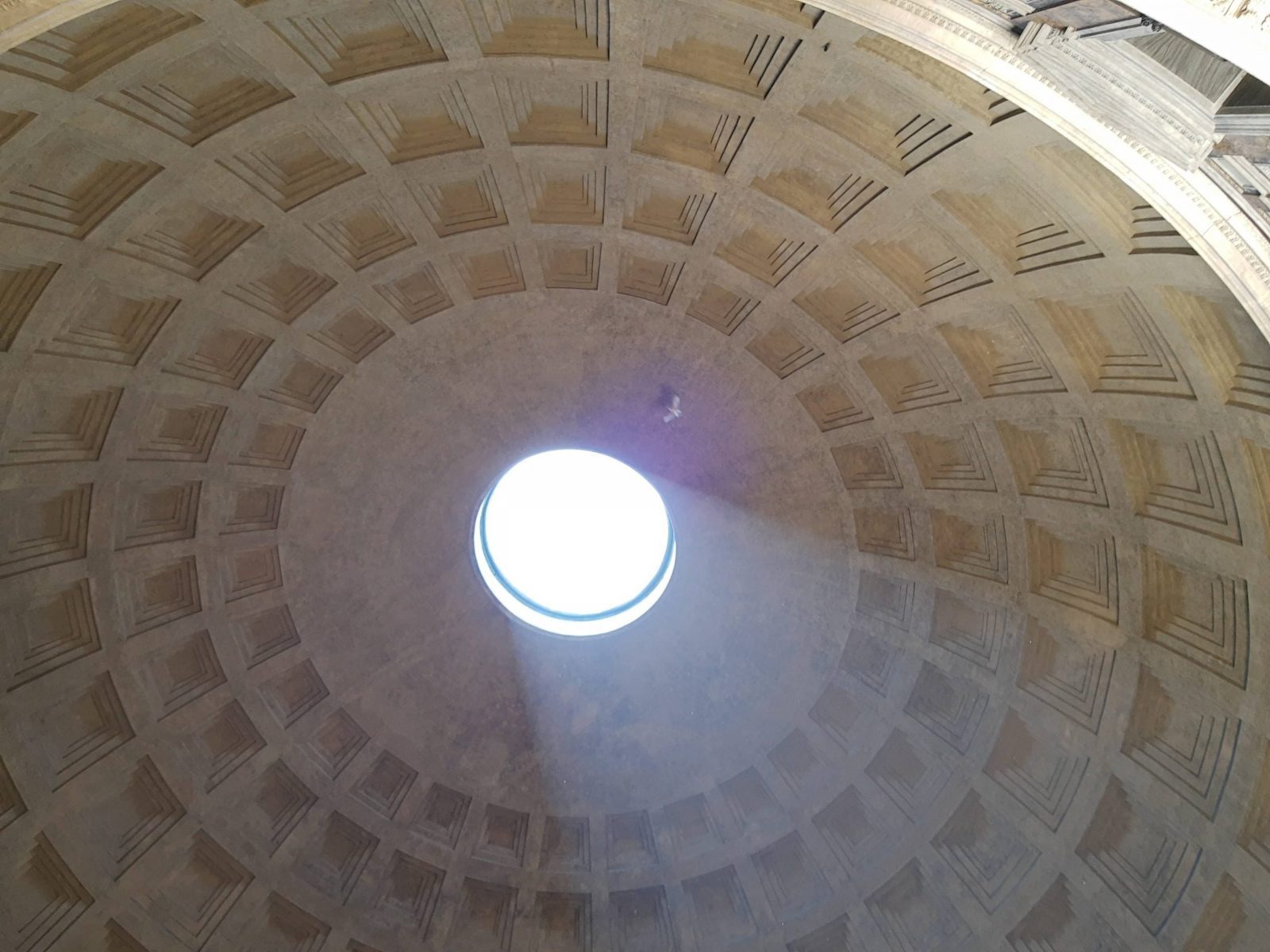 by Giorgia
on December 11, 2020
To approach the Pantheon is always magic with its spiritual atmosphere. It doesn’t matter if it rains or sunshine, it doesn’t matter if it’s sunrise or night. To embrace spiritually such an architecture we have to step back from the architecture itself and think about the name. Many would think immediately about the Parthenon and for sure the name is Greek and the emperor Hadrian, under which in 117 A.D. was erected the actual structure, was certainly a Greek-freak. But even if the name of the famous Greek temple of the Athens acropolis has inside all the letters of our best ancient Roman building their meanings is far away from each other. In fact the Parthenon was dedicated to Athens, the goddess of wisdom and patron of the city that was born from the head of Zeus and for this last fact called Parthenon from the Greek verb giving birth. “Pan” instead means all and “theon” gods from this fact and the niches inside historians have assumed that the Pantheon was dedicated to the twelve Olympian goods but the matter is still discussed.
That’s what you see when you approach this building: a Roman tribute to Greek culture. At that time the Roman empire stretched from the Black Sea to Portugal, from England to Egypt. Greece was a Roman province since 27 B.C., a new treasure which world, mythology and philosophers conquested Rome long before. The ruling family had proprieties all over the Mediterranean and the high trained Politicians were sent to manage those land economically. In such a world foreign influence was of high prestige: they imported wines and strange sauces from Africa, Metals from today-north Europe, even silk and tropical fruits arrived to the capital in large quantity, a city speaking Latin, Greek and Hebrew. They even stole gods from other civilizations (pointing to a full protection insurance). The very columns of the Pantheon of grey and pink granite came from Aswan, Egypt (another land of great cultural impact on the Empire). They are made of one piece forming a kind of colorful forest and in spite of the far-away white Greek model. Today there are pieces of Carrara Marble still covering some outside walls, a material just recalled in Hadrian times into fashion to remind August great times.
But the marvellous Roman technology that we still wonder is just behind: the so called “Rotonda”. If you look at it from outside you see all its massive majestic size and especially the brick work mastered by Romans from II B.C. Yes, they stole, also technology but they constantly improved it. This type of technique made of brick and cement (today technically speaking pozzolana, a mixture of ashes and gravel) was called opus cementitium and there were different types of it depending on the construction. Today the Roman cement is studied and replied in some cases because of its durability and sustainability. Today the Pantheon is one of the more beautiful, still mysterious architecture on earth and if you want to enter the Rotonda, to admire also the inside and discover more of its story you have to walk between the columns and reach one of the three bronze portals of antiquity left in Rome. At the moment it’s closed because of the state measure to prevent the spreading of Corona Virus but hopefully it will reopen on January 15th and then you will travel to the eternal city and walk inside with me telling you the rest of the story. In the meantime to enter the Pantheon, you can watch my video here below.