The sacred work of men – Tuscia by bike II 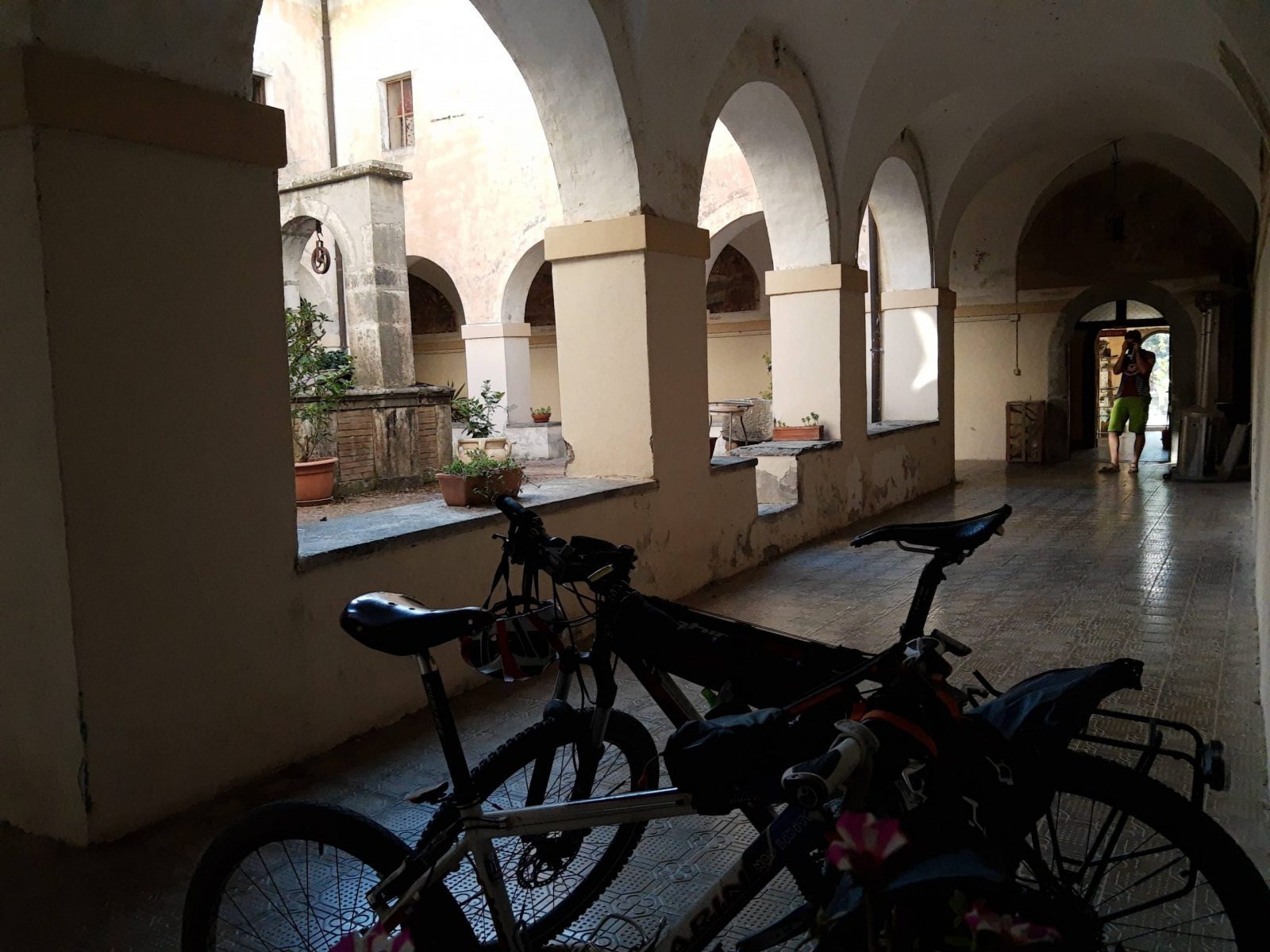 by Giorgia
on August 12, 2020
We left Civitella d’Agliana where Sergio Mottura, a renowned wine-maker, has its oldest cellars in the ancient hearth of town (they kindly guided us through the ancient rooms) and rode down to the valley. Only two kilometres and we reached the meeting point to visit La Serpara, the sculptures garden of Paul Wiedmer. The entrance path brought us deep in the valley closed to the Rio Chiaro river and it is flanked with some art works that designed the way from the outside to the inside world. The gate was open since we were expected and a welcoming dog came immediately towards us wagging his tail. Then Jacqueline showed up, our guide, Czech artist and inhabitant of the magic world of Paul Wiedmer. Paul wrote once: “I tell another story in my sculpture garden La Serpara in Civitella d’Agliano, a story to discover for yourself, a narrative about life in a beautiful valley, about the interplay of nature, art and friendship.”

In a catalog of the Swiss artist I found the reference to Gea, the goddess of earth to which Jupiter gave a mantel of land masses and vegetation to cover her infernal body but also references to Ceres, Feronia, Tellus, Mefite e Cybele, all goddesses that were related to underworld, to life-cycle, vital energy, soil and fire, all themes that Paul Wiedmer loves. To keep the dialog open he invited his friends to realize a piece of work in this garden. My favorite is, maybe because of a professional distortion, Cultura by Daniel Kufner, a German artist that played with the concept of an archaeological evidence of an ancient ox, whose DNA will allow a repopulation of the valley.
We lost track of time and we left that sun was high and hot: to climb up was not easy. We arrived in Castiglione in Teverina and following the narrow streets flanked by colorful small houses we were led to the main squares to quench our thirst and to have finally our delicious breakfast in the Central Bar Pastry Shop with a cappuccino and a croissant.

Cereals and grass fields, vineyards, oaks, chestnut, hazelnut, and olive trees made our way cheerful making every corner a pleasure for the eyes to enjoy it. After a long climb and a big old stone through we arrived in Sermugnano, a tiny little town, characterized, like many settlements in this land, of red-tuff-bricks buildings and narrow alleys that zigzag up and down.

To arrive in Lubriano was refreshing as a waterfall in full summer: the view on badlands is characterized by canyons, ravines, gullies, buttes, mesas, hoodoos and other such geologic forms. In the middle of this amazing view there is the famous Civita di Bagnoreggio, the dying town, which is not dying anymore thanks to concrete injections sponsored by movies, the international Civita Institute and the crowds of tourists that stroll up the tiny narrow long bridge to reach the ancient settlement, where now officially there are eleven residents. Lubriano develops on a long picturesque cliff and thanks to its dominating position gives an airy feeling. We took a beer, between the industrial ones my favorite: Menabrea, the most ancient Italian brewery still active. The beer is still produced in Biella, Piedmont (Turin region) and the company swears that one of the secrets of its longevity and taste is the Alps water. You might now think that beer macht neither Italy nor bike, then I suggest you read my two FB post on it:

After a few up and down we arrived thanks to some secondaries mule tracks above the Bolsena lake, the biggest Vulcano lake of Europe, and exactly in the monastery of S.Maria del Giglio. Changed and showered we got down on the shore and we had the opportunity to eat in one of the best restaurants in a pile dwelling at sunset! Just pure amazing poetry to breath, ear, see and taste!!! W Tuscia