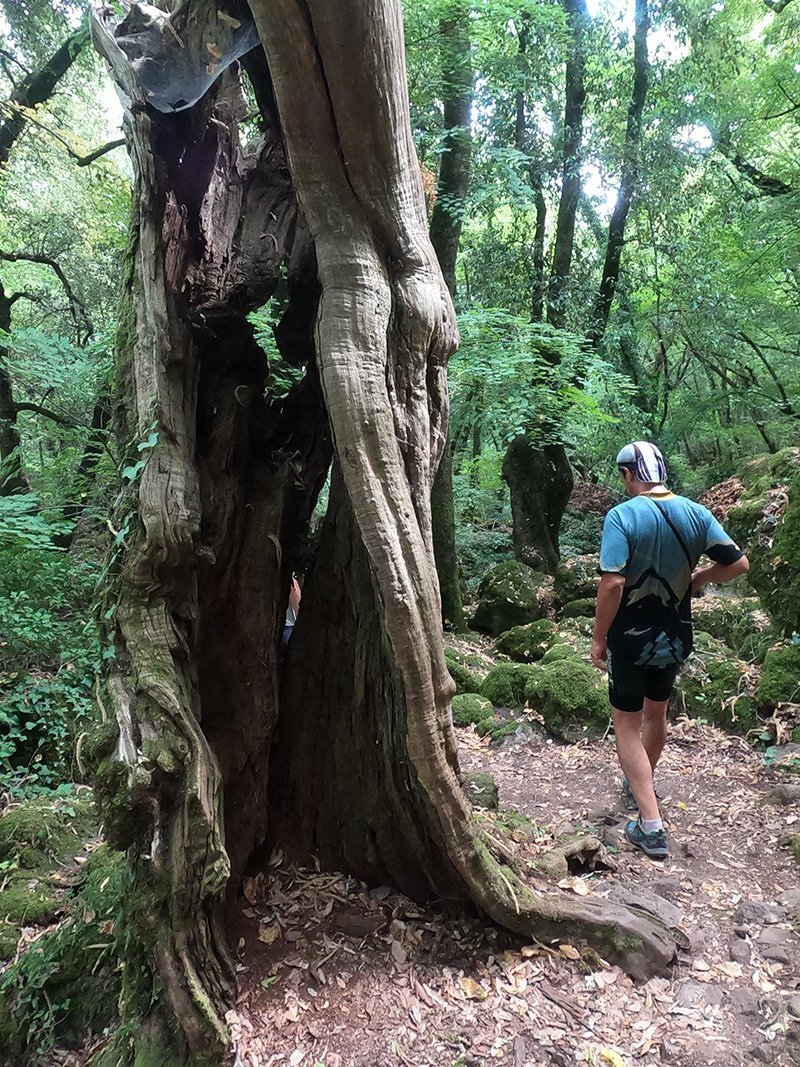 by Giorgia
on August 17, 2020
We left the monastery S.Maria del Giglio early not to miss a very important appointment. To see the ancient center of Bolsena waking up with that special light of early morning gave us a nice energy. We passed the S.Cristina religious complex reminding of a XIII century miracle and we had our cappuccino and croissant breakfast along the narrow and nice Corso della Repubblica. The road around the lake had a bit of traffic and some tracks but everybody was very respectful of our space and then we climb the volcanic slope again with a good pace to make sure to be punctual.

At the 27th km, 9.30 am, one hour before our meeting hour, we arrived in Torre Alfina, Ulysses with a fix return, Penelopes weaving always different stories. In this village, between the regions of Latium (Rome region), Umbria and Toscana, there is a fairy-tale-looking Castle above. It was build in XIII century and remake first in Renaissance style by the noble Monaldeschi family, from noble Bourbons was sold in 1880 to the family Caen, bankers from Antwerp that financed the Savoia family that became the royal family of Italy with the union. Edward was reward with the title of count and then buying the castle he became marquis. The land in his propriety was huge and the sons could build their own residences upon hills looking at the castle and connect them with roads and bridges. Then this new generation finaced Mussolini who thanks to their money was able to get and consolidate his power. When the racial laws were approved the family being jewish lost all the proprieties and the traces of the two sons were lost.

At 11 am all excited and happy we met our guide, Emiliano. We had the opportunity to have him open the forest of Sasseto (Bosco del Sasseto in Italian) for us. Now this place is important and magic for many reasons: 1. it’s public; 2. the forest planted and loved by Edward Caen is untouched 3. the connection between Torre Alfina residents and the wood that sheltered them and protected them in II World War becoming also a connection between local and world history. This is an incredible story because the village of Torre Alfina was able to buy the forest making it public and protecting this amazing place further. I won’t even try to tell you the enchanting athmosphere that we lived there, the multiple shapes and faces of the trees and any virtual experience leaves only a pale trace of the real visit. But I can tell you the story of the wolf Achille that we learn thanks to Emiliano.

He told us that thanks to the night infrared cameras a herd of wolves was detected, fact that gave us great joy being this animal essential for the balance and the harmony of our landscape. Did you remember the story of Achille? He was one of the Greek heroes that fought in the Troian war. He was invincible exept for his heel from which his mother held him when he a baby and was immersed in the potent waters of the Stigi river. The wolf Achille was for sure an amazing predator but one day he was cut in a jaw-trap set by poachers. We can today recognized him in the videos immediatly by his pace and way of walking: his herd never left him behind: getting him food and waiting for him in major mouvements.

Leaving Torre Alfina with all the thoughts that these stories arose was strange but the search and finding of fresh water, nature and the landscapes brought us back to now. We reached Acquapendente with a total of circa 40 km and 519m of gain. A town with a leggendary etruscan foundation, a certain medieval role for pilgrims being on the Via Francigena, and a rebellion story agains the holy emperor, Federick Barbarossa. Acquapendente saw also the war between the noble men Odoardo Farnese and the Pope Urban VIII but it was the Pope Innocent X that destroyed the town of Castro electing Acquapendente as Vicar’s seat (the ruins of Castro are visitable, in this town is situated the Romance The Abess of Castro by Stendhal). The city is named after a series of waterfalls along the Paglia river; if you translate the name it would sound “slantingwater”. Enjoy the athmosphere of its pilgrims crossroads. Aren’t we all somehow pilgrims?