Under a spell – Tuscia by bike IV 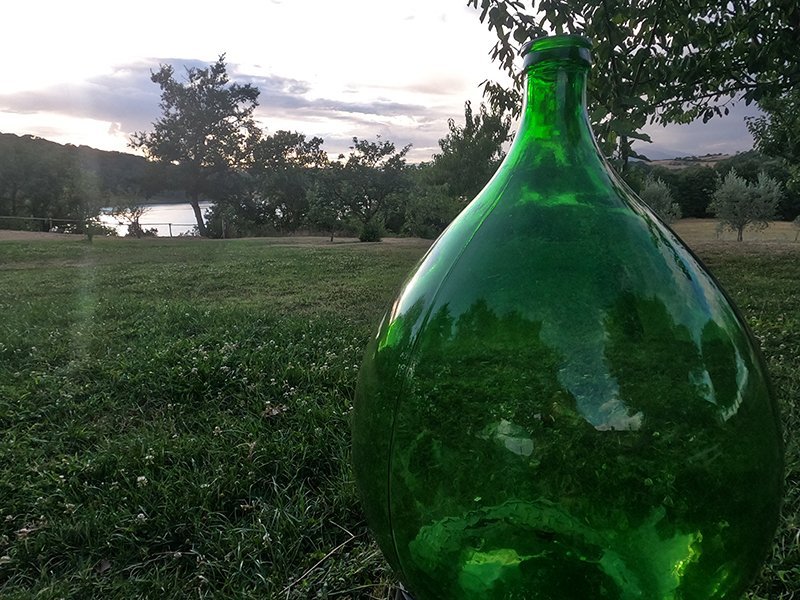 by Giorgia
on August 22, 2020
If the previous day was one of the most interesting for us, the charm and lure of nature increased and reached many picks on day fourth of our journey through Tuscia region.

As we were ready for our breakfast we met on the main square of Acquapendente, ancient cross way for pilgrims, Ludmilla and Roman cyclists from Czech Republic. They joined us for a simple Italian bar breakfast sharing also the beauty of seating at the tables of the Central Café. We crossed other three pilgrims on bike before we finished our croissant (a men from Holland and two men from north Italy).

As soon as we left Acquapendente the sunny colorful landscape welcomed us biking and we could see one of the most ancient oaks of the region, protected by his devoted owner. The color that stroke us most in the sweat landscape was golden yellow thanks to the amazing field of hay. We arrived soon in Grotte di Castro that takes the name from the caves were the resident hided during II World War (probably an Etruscan necropoli) and from the destroyed city of Castro. This fortified town born on a tuff crag in Etruscan time became in XVI century property of the family of the Pope, Paul III Farnese, a countship that extended from Bolsena lake to the seaside and had the city as capital. It was partially rebuilt and restored to honor its role but first the interest of the family Farnese moved northward with a more rich countship and then the conflicts with the next Popes exploded. In December 1649 Innocent X Pamphilj, after having evacuated the town, ordered its complete destruction.

After a dirty charming road brought us directly at the boundary streets of Gradoli that delivered us at the feet of the Farnese Castle, a town hall and a museum with that day a temporary exposition of paintings also by a charming lady that welcomed us with foreign accent just at the bottom of the monumental staircase by the architect Antonio Dal Gallo.

From Gradoli we climb up the Vulcano again. The road transformed slowly itself being asphalted first, then covered with concreted and then dirty. The landscape followed the climax and from the renaissance houses we arrived to a chapel and then vineyards dominating the lake of Bolsena, the main vulcano mouth! The view was awesome. The clouds restored us and made even more beautiful the sky.

As we came back on one of the principal streets of the area started raining… I gambled on the weather forecast and I didn’t brought my raining set and I won! It rained only for a couple of minutes and then we could go down the vulcano wall to a virgin valley where men and animals live in harmony, where everything is special and an ancient old legend quoted by Dante Alighieri gives the Red Wood, Bosco Rosso, a darker charm. Trying to cut through the wood we looked for a path inside the wilderness but we could not find it.. maybe we were looking for the ruins of the castle legend that none could tell us were they are.

We arrived in our little personal paradise early to enjoy the lake of Mezzano that lays in the middle of this valley attracting different species of animals but especially the holiday farm Fra’ Viaco on its side, where the family Zapponi from ever worked the land and from four generation welcomes travelers to relax here. We had also our first thermal path (I was once in the famous baths of Istanbul but I was young and foolish and totally unaware of what was going on around me). The dinner was delicious and the wine too… and everything arriving there and around us was so relaxing, so beautiful, so attractive and mysterious at the sometime that it looked like a dream. Doesn’t make you dream too?